Writing this is definitely harder than I thought it would be.  Every time I sit down to write, words tend to escape me and it also seems to get longer and longer.  I’m probably forgetting a few details and/or purposely forgetting them…so much happened in such a short amount of time that it’s very hard to tell our story.

I want to say our Sunday morning started out like any other morning, but it didn’t, it was hubby’s birthday, so we decided to walk into town for breakfast!  The Memorial Bridge had finally opened, after almost 2 years of construction, and what better way to get labor moving than a nice mile walk!  So off we went, walking into town, headed to our favorite coffee spot, Breaking New Grounds for a birthday breakfast, some reading and enjoying the beautiful August weather.

I had been having Braxton hicks off and on and at our last doctors appointment I was already 2cm!

I hadn’t felt any different that morning or even throughout the day, I had actually started to think she was going to stay inside forever and that I would probably either go 2 weeks late or would have to be induced.  But babies come when they want too…So it was a surprise to me when my water broke that evening while watching pre-season football, (I blame Eli Manning for my water breaking, since he was playing the worst game of his life and I’m not even a Giants fan!).  I had hoped to labor at home, but since finding out I was Group B strep positive, I would have to make the trip into the hospital as soon as my water broke for antibiotics.  I actually sent my husband back home at one point because we forgot the camera!  It was the ONE thing I couldn’t forget…the funniest part of this whole experience was giving people direction on how to use my camera, hubby did a great job, but most of the shots were either taken by the nurses, my mom, or my MIL…I refused to take it out of manual mode & do you know hard it is to explain to people Back Button Focus between contractions!

(I love the truth in all of these photos, they are especially powerful to me).

It was a little after 10pm once we reached the hospital and with all the excitement and adrenaline running through my body there was no rest to be had.  By the time I ordered breakfast I was already having consistent contractions and they were getting stronger.  The best way I can describe contractions are, they are like waves, they begin, build in intensity, peak, then tapper off; then you have a few minutes to relax and regroup.  Some were more intense than others.  It was an experience I was both looking forward to and dreading!

Time seemed to slow down at this point, as pain started to consume me, I tried desperately to stay strong, breath, and practice what I was taught.  There is so much I want to say about my birthing experience, but I’m afraid this would get too long, but I will say, you find out how strong of a women you are during labor (even if you choose drugs-which I ended up doing).  You will also discover how strong your partner is too.  I didn’t care who was in my room at that point, as long as my husband was there, his voice is the only thing I listened too.  He was the most amazing coach, he pushed on my back when I told him to, he got me water & ice when I needed it and he gave encouragement when all I wanted to do was give up, he was my rock.

Yes, I got drugs and you know what, they were fabulous!  After about 12 hours of labor (serve back labor I might add) my body was progressing beautifully and I was already around 7-8 cm (I believe they call this phase Transition), but by that point I had had just about enough and decided my body was telling me it was time to relax.  To say I was scared to get an epidural was an understatement, having someone stick a needle in your back is  just unnatural!  The experience wasn’t as traumatic as I imaged it and almost instantaneously there was relief.  Rest is exactly what my body needed and I finally made my way to 10cm!

This is where it got tricky!

I thought pushing was going to be the easy part…I was wrong…with the epidural I could barely feel the urge to push, which is exactly what I was trying to avoid.  It seemed like I tried every position known to man, but nothing seemed to work and what I thought would be a quick, 1, 2, 3…push she’s out, turned out to be a long 4 hours and we might need to talk about other options.  Now, I consider myself a strong person, while people kept pointing out the fact that I pushed for 4 hours where as a typically first time mom pushes on average 1.5-2 hours, I still felt like a failure.  I hate the word “Can’t,” but I must of uttered it 100 times that night.  Chalk it up to having a small pelvis, or the fact that she was very active and kept moving her head, she just didn’t want to come out and mama was exhausted, starving & very, very weepy!  I was like a blubbering mess!

So long story short, the doctor was called in and gave us two options:  I could keep pushing, since peanut’s heartbeat was perfect and she wasn’t in any distress, or I could have a c-section and finally be put out of my misery!  Of course I chose neither and just wanted to go home…but unfortunately that wasn’t an option.  So after 26 hours of labor I threw in the towel. 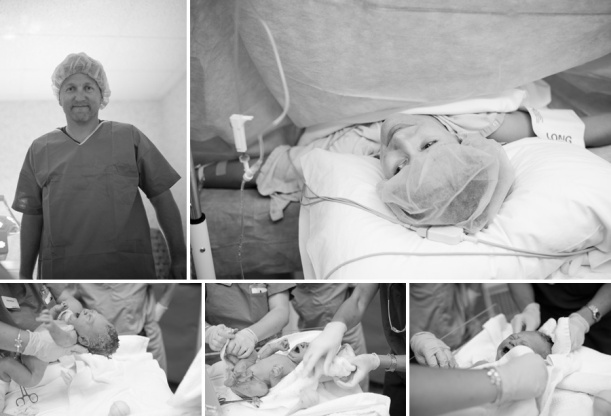 Everyone involved in her delivery were amazing, all the nurses & the doctors were fabulous!  I didn’t feel pressured, rushed or stressed…everyone was so nice and the environment was very relaxed and it felt like we had everyones undivided attention.  Even though I was nervous and overwhelmed, I didn’t feel scared.

Regardless if you have a vaginal birth or a c-section, I believe the feeling when your baby comes out is the same for everyone…complete joy, excitement, disbelief and love!  My very first thought when I saw her for the first time was how much she looked like her daddy!  It is very much an out of body experience. 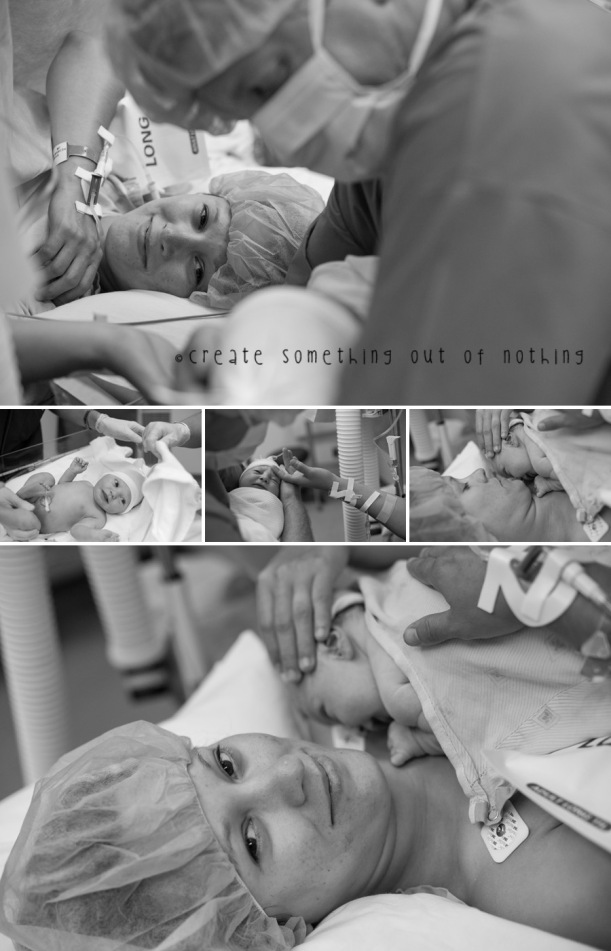 It seemed like everything that could go wrong, did, because after all of that, 36 hours later I ended up getting an infection.  The hospital has a 24 hour fever-free policy before you can go home and after the third time I spiked a fever, I had two thoughts, I was A) going to live at the hospital forever, or B) going to die.  I was hoping it wasn’t B…but when you’re in that situation, many thoughts start to dance through your head.

By Friday, I started to respond well to the antibiotics and finally by Sunday afternoon we were all allowed to go home; after a week in the hospital!  I can’t say enough about the care we received and loved every single one of our nurses who took such good care of us!  I really believe it’s because of them that we had such a positive experience even though, excuse my french, “Shit hit the fan.”

I know this wasn’t the birthing experience I hoped for, but I’m not sure what I was expecting…it was such a unique, once of a lifetime moment that I couldn’t predict what was going to happen.  Every pregnancy and every birth is completely different.  My biggest revelation, one that I’m still trying to come to terms with, is my birthing experience shouldn’t define me as a women, a mother, or a person.  This reminds me of the saying, “Things happen for a reason,” and I have faith that one day I’ll figure out why this happened the way it did and heal from the guilt that I feel.

I’m sure with time & support this to shall pass, but the one thing I do know, I would go through it all again because it gave us her.

If you haven’t yet, you should really start following Rebecca Cooper at Simple As that!  I’m excited, since she started her Simple Things Sundays again, which means I have no excuses not to post photos on my blog (especially now since I have something cute & squishy to take photos of!)  I recently purchased her homemade storyboard templates; it is a great way to display multiple photos in one frame…which gave me the idea to showcase my growing belly from the past 40 weeks!

Liked I promise, here are a few from our maternity shoot…with the help of our trusty tripod and hubby did a great job working my camera, we got some great shots!  I really need to invest in a remote, that may be on my Christmas list this year!  (And I really know why people hire professionals for moments like this…even though it was a lot of fun and editing these were great–it’s hard work and stressful!) 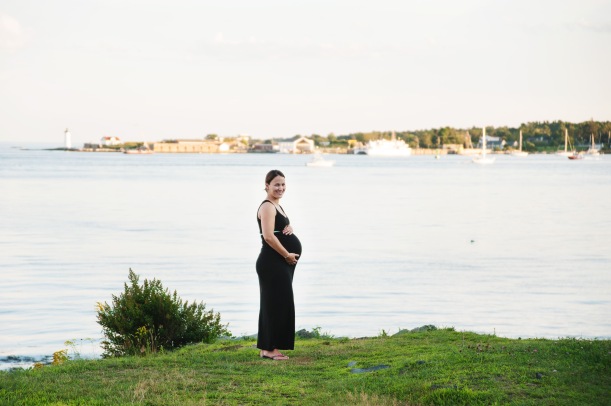 I am so blessed to live where I do, it was truly an amazing, beautiful summer night in Maine with the love of my life!

"Beauty can be seen in all things, seeing and composing the beauty is what separates the snapshot from the photograph." – Matt Hardy