Being away from friends and family can be hard, especially when all you want to do is go grab a cup of coffee and talk.  My best friend Danielle, from Two Red Birthstones, reminded me that even though we are far away, we are just a phone call away.  We move away from home, friends go off to college, we all travel to new places and find new adventures, that’s what growing up is all about, so it can be hard to keep in touch with love ones at times.  But if you just remember that they are only a phone call (or now a-days Skype or Face-Time) away, then you can continue to strength and keep those relationships growing!

Remember those heart friendship necklaces you use to give to your bff’s in grade school, where each of you takes half, well she found new take on it, and yes she has the other half!

Thanks Danielle for this wonderful reminder! (it’s even in my favorite color!)

Earlier this year I read an inspiring post from Two Red Birthstones about her word of the year and decided to look further into this concept.  Which brought me to Melanie’s blog, Only a Breath (have more questions or want to know her word of the year, read more here), her purpose was that this word would shape the rest of the year for her instead of making a list of different resolutions.  This made a lot of sense to me and I really wanted to participate this year, but had no idea what my word would be…until about a week ago. 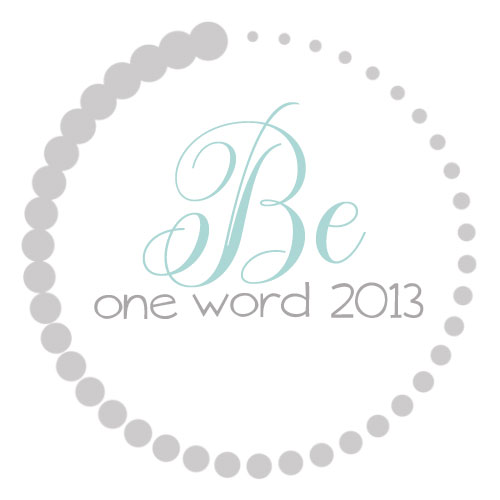 It didn’t occur to me until I finally realized I still didn’t really know who I am or where I’m going. “Life is a journey, not a destination” -Ralph Waldo Emerson, but it has been hard for me to just “be” sometimes, so I’m hoping this little daily reminder will allow me to just…

I can’t wait to learn just to BE me!

I would like to thank Melanie for making this beautiful button for me!  You can get one too, head over to her blog for more details and she’s doing a monthly link up on the 15th of every month, you can join in too!

So after quite the discussing with the hubs; I’m going into my 14 week, even though I’m posting week 13, I’ve been crossing off the weeks as I finish them…pregnancy is kind of confusing, they say 9 months when in reality it’s 10 months (40 weeks).  Things have been going pretty smoothly, I’m in that “fat” stage everyone talks about, you know the one where you’ve eaten too many tacos and you can’t button your pants, well that’s me right now!  I’ve been meaning to post about my shirt, I first found in on Pinterest and decided it would be a fun project to make before we decided to conceive, but then thought about it some more and it was a bigger project than I wanted to take on…so I went searching to see if I could buy it!  And guess what!  You can!  At One Little Minute!  She also has some great project ideas!

How far along?  13 weeks: Second Trimester!

Maternity clothes?:  Bought maternity jeans, so comfy!  And some tank tops, but nothing more.

Have you started to show yet:  Yes, that food baby won’t go away.

Symptoms:  Started to get my energy & motivation back!  Headaches are the newest thing though.

Sleep:  I hate sleep…I sleep just fine on the couch, but once I go to bed it’s impossible.

Miss Anything?  Coffee maybe…but no.

Movement:  I hope soon, it would make this worry-wart feel better!

Anything making you queasy or sick:  Nothing really, it all depends.

Gender:  I’m still guessing it’s a boy, but won’t know for a while.

Belly Button in or out?  In

Wedding rings on or off?  On

Happy or Moody most of the time:  Mostly happy, it’s all starting to sink in now.  Been having some trouble sleeping so I get moody later in the afternoon because I’m tired.

Looking forward to:  Our next doctor’s appointment, get to hear the heartbeat again!  And my sister visiting, hopefully we’ll go baby shopping!

"Beauty can be seen in all things, seeing and composing the beauty is what separates the snapshot from the photograph." – Matt Hardy